Here's Something To Think About

It's time for a new series on the blog! As I may have mentioned once, twice, or an odd dozen times, I have recently published a new book: Idol Thoughts: The Captivity of the Mind and Its Liberation in Christ. It is already selling quite well, so I hear, and I have received much positive feedback from its early readers.

So of course being a rapaciously greedy author who wants to rake in all that cold hard royalty cash (and all the professional authors reading this will burst into peals of merry, yet somehow bitter, laughter here. The only reason the cash is hard and cold is because it is actually spare change), I want to promote the book on the blog a bit more.

I do want to get the book out there, of course, and so I want to talk about it a bit, without of course sharing reams and reams of text from it (which would be counter-productive since I, uh, do want people to buy the thing).

So I am going to write a series of twelve blog posts, corresponding to the twelve chapters of the book. This post will match up, roughly, with the first introductory chapter. So what is this wonderful, ground-breaking, enthralling book about? (Humility, of course!) 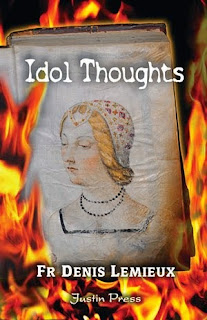 Idol Thoughts is basically a popular presentation of an very ancient doctrine, coming from the Desert Fathers of the 4th and 5th centuries of the Middle East. These guys were the true pioneers of Christian spiritual doctrine and practice, and laid down for the rest of the Church a basic pattern of prayer, fasting, and self-mastery that has been the ascetic way of the Christian every since.

One of them, Evagrius Ponticus, was a man of learning and so wrote systematically about their eremetical life. He developed a doctrine of the eight logismoi, or thoughts, that took human beings away from God, away from true life, away from happiness and sanity. A great deal of the spiritual practices of the desert were about the mastery of these thoughts and the transformation of the mind and heart into the truth of the Gospel.

Evagrius' disciple John Cassian would take this doctrine of the thoughts to Western Europe where he went to establish monastic life, and his writings were foundational in our Roman Catholic spiritual theology. A couple centuries later, Pope St. Gregory the Great would tweak the list a bit, pare it down from eight to seven, and called them the Capital Sins. And so we have the familiar list.

I am resetting the clock in this book to bring back that original list, and the original name of 'thoughts'. Partly it is because I like the older list better. Also, I like the terminology of 'thoughts' better - these things are only sins when we give our wills over to them, but the thoughts run wild in us even before that, and live in us often unrecognized as fixed patterns of belief that color our whole judgment of reality.

I think in our psychological age the doctrine of the thoughts and their effect on our human thriving is an easy sell for people. We all know about the 'stinkin' thinkin' that if you are a recovering alcoholic, say, 'leads to drinkin'! We all know that people can sabotage themselves in a thousand different ways by patterns of negative and self-defeating thoughts, that before our lives go off the rails behavior-wise, so often the real damage has begun in the mind, in the false beliefs and bad judgments we allow to rule in us.

So this ancient doctrine of the logismoi is about due for a resurgence in our therapeutic culture. Now I maintain in the book that these eight thoughts are fundamentally idols, in that each of them proposes a scheme of happiness that is not God, that is an alternative to God. And they are lies, in that real and abiding human happiness comes only from our living communion with God made possible in Jesus Christ.

And so, as I develop in the book, one of the surest ways to fight the thoughts of man and their illusory idolatrous promises is with the Thoughts of God--the words of Scripture and especially of Jesus Christ in the Gospels. So my book, while being about the thoughts, what they are and what they do to us, is also about lectio divina, the ancient practice of praying with Scripture in a structured meditative way. Specifically, for each thought I provide a welter of appropriate Gospel texts to meditate on and provide some simple meditations on a few of them, just to get you started.

It's all about the purification and transformation of the mind and of the inner person, out of which by God's grace we can choose wisely and well how to live in the world. So we will be looking each Wednesday in the weeks ahead at the eight thoughts and what to do about them: gluttony, lust, avarice, anger, despondency, acedia, vainglory, and pride. And don't forget to buy my book, y'all.
Posted by Fr. Denis Lemieux at 7:12 AM

Stuff By Me You Can Buy

Fr. Denis Lemieux
I am a priest of the Madonna House community based in Combermere, Ontario, Canada. You can e-mail me at fatherdenis@gmail.com